Join Batman in his fight against crime 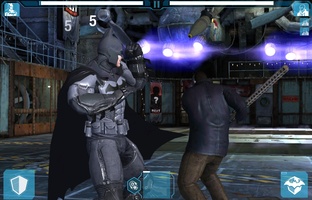 Advertisement
Batman: Arkham Origins is a 3D action game where you will control Batman, the Dark Knight of Gotham, as he defends his town against the many different thugs, crooks and super villains that are devastating the city.

The combat system in Batman: Arkham Origins is very similar to that in Injustice: Gods Among Us (in fact, both games were developed by NetherRealm Studios). You will have to tap on the enemies in order to hit them and slide your finger along the screen in key moments in order to carry out special attacks. In addition, you can cover yourself by tapping on the screen with two fingers.

As you win more combats in Batman: Arkham Origins, you can move Batman up a level and earn resources, which you can use to improve your superhero's skills. A bigger health bar, stronger punches, special movements... Batman has a lot of room for improvement.

Visually speaking, Batman: Arkham Origins will also remind you a lot of the aforementioned Injustice, with outstanding graphics that wouldn't be out of place on a tabletop console. Of course, you will need a powerful device in order to see the graphics run fluidly in all their splendor.

Batman: Arkham Origins is an outstanding action game. Not only does it have incredible graphics, but it also has very entertaining game mechanics.
Reviewed by Andrés López Translated by Erin Teske

You need at least 1.5 gigabytes of free space on your device.

does the game works huh?? i what to know this app cannot be fake i use it lots of times...

why there's nothing happens...it says you may not purchase the app...please help...is this a fake app?

Marvel Puzzle Quest
The superheroes have taken over the ledgendary Puzzle Quest
Krrish 3: The Game
The official game of the Indian blockbuster
Injustice: Gods Among Us
DC superheroes in their most spectacular battle
Spider-Man Unlimited
With great power comes great responsibility
Marvel Contest of Champions
The most epic battles in the universe
MARVEL Future Fight
The best superheroes in the universe united in one game
Super Hero Fighter
Fights between the most powerful superheroes
MARVEL Avengers Academy
Go back to school with the Avengers